Coastal erosion is a growing problem in the UK; critical infrastructure along with coastal communities are under threat. Shoreline Management plans produced over the last decade had to make decisions on what can be protected and what must be let go.

This is a particularly pressing problem along the east coast of England where Royal HaskoningDHV has been tasked with designing coastal protection for the nationally important Bacton Gas Terminal. Taking inspiration from the Dutch, a sandscaping solution has been designed. It will be the first such project in the UK and outside of the Netherlands.

This sustainable solution uses the power of the sea to naturally shift large quantities of sand down a coastline providing flood and coastal protection to critical infrastructure and also to neighbouring communities - thus building with nature.

THE IMPORTANCE OF BACTON

After a storm surge in December 2013, the land between the Bacton Gas terminal and the sea was eroded by 10 metres, leaving just 15 metres between it and the sea. Royal HaskoningDHV was approached by the terminal operators, Shell and Perenco, to find an urgent solution to protect the terminal against coastal erosion.

In addition, the severity of coastal erosion in the area means that some 200 homes in the villages of Bacton and Walcott are at risk of being lost within just five to ten years. The Shoreline Management Plan for the area had concluded that no solution could be found to protect their homes for the long term.

Jaap Flikweert, Flood and Coastal Management Advisor, commented: “After developing various options we saw the unique potential of using the innovative sand engine solution, as hard solutions such as concrete groynes would inevitably create more problems further down the coast.”

Implementing the first sand engine project outside the Netherlands, will not only protect the terminal from cliff erosion in a 1 in 10,000 per year storm, but has the added benefit of protecting the villages of Bacton and Walcott. It could lead to similar approaches being implemented elsewhere along the UK coastline in the future.

Jaap continues: “By implementing an innovative solution and turning this from a terminal protection scheme into a multi-objective project, we can not only protect some of the UK’s most critical infrastructure but also the communities who share that stretch of coastline. In addition the amenity of the shoreline will be improved.”

Jaap explains: “As the project developed, we recognised that if we can design to avoid making things worse for neighbouring communities, we should be able to design to make things better. Once we settled on the use of sand, we could factor in enough material (around 1.5 million cubic metres of sand in total) to help restore the neighbouring village beaches that over time have suffered from serious erosion which has eaten away the buffer in front of the seawall. The solution will provide several hundred people in the community extra decades of protection from the sea, therefore buying them time to adapt to the inevitable coastal erosion.”

At the end of its lifetime the sand can be replenished and maintained as required – keeping costs low and the process sustainable. 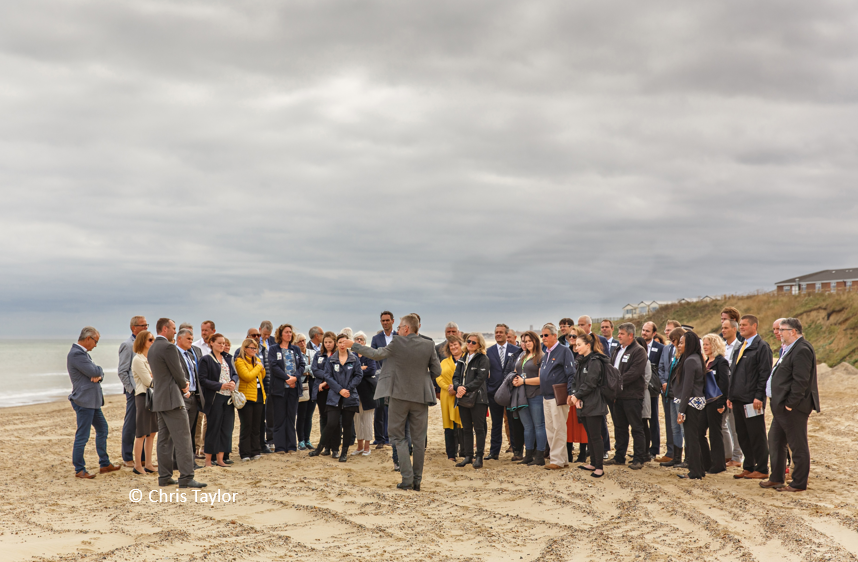 As a result of these additional benefits to the local community, the scheme – which could cost up to £20M – has now evolved into a public-private partnership between the Bacton terminal operators together with North Norfolk District Council.

Gökhan Doygun – Commercial Advisor at Shell responsible for collaboration between the Bacton Terminal Operators, Royal HaskoningDHV and other parties – commented: “The Bacton Gas Terminal is an important energy asset for the UK. To protect the Terminal and the associated pipelines, we need a solution which will be sustainable and will allow us to continue operating into the future. Due to its green nature, Sandscaping creates a great opportunity for the Bacton Terminal and the neighbouring villages to collaborate.”

All parties have now agreed on a preferred design – with work planned to begin during summer 2018 following full consultation and consent processes. Eyes will be on the project as we have already worked with The Crown Estate to identify other areas around the UK that could benefit from a similar scheme, changing the face of coastal protection for years to come.